Ever heard of EPOC? Yeah, neither had I until I started taking graduate-level Exercise Science courses. Now that I’ve learned quite a bit about it, I just have to clear something up: EPOC is a beautiful thing. In fact, it’s so beautiful that it inspired me to write a blog about it. Why? Because I believe everyone should learn about the power of EPOC and that you shouldn’t have to take some 500 or 600 level class to learn about it! And don’t worry, I don’t have a PhD … so I still speak English, not Einstein (;

What the heck is EPOC ?!

Okay, this is the fifth time you are seeing “EPOC” and you are only on the second paragraph. I bet you are dying to learn what it means now. Well, lucky you! The wait is over! EPOC stands for Excess Post-Oxygen Consumption. “Well that didn’t help at all.” Bear with me, my friend! I am true to my word: I speak English. Before I can explain what Excess Post-Oxygen Consumption means, I’ve got to give a quick lesson on something called Oxygen Deficit.

Oxygen Deficit… In a Nutshell

Below you will see a figure from my EXSC 555 textbook. (Lucky you! You didn’t have to spend $ 300 to see it!) Before you freak out like I did, this figure explains Oxygen Deficit. Basically, all it’s showing is that, at the very beginning of exercise, there is a difference between that amount of oxygen your muscles are using and the amount of oxygen your muscles actually need. You see, your body always has oxygen flowing through it — if it didn’t you’d be dead, or at least on the verge of it. That being said, when you exercise, it takes your muscles a little bit to be able to use oxygen to produce the energy you need. 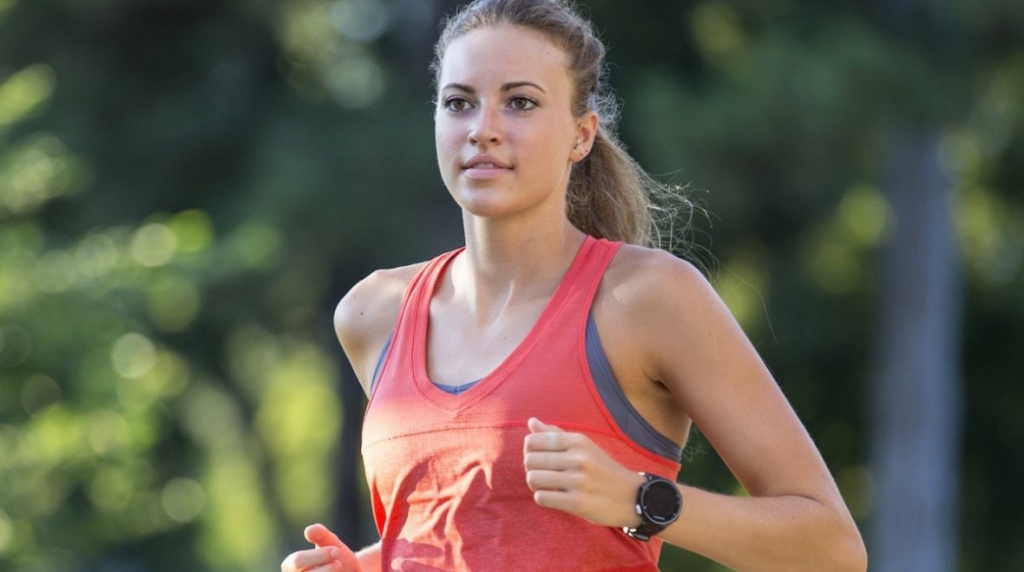 Ever heard of aerobic exercise? “Aerobic” essentially means that your muscles are able to use oxygen to produce energy. Therefore, in order for exercise to be aerobic, your muscles have to be using oxygen to make energy (this usually occurs when exercising at low to moderate intensities). Once you start working out at higher intensities (e.g. running sprints, lifting heavy, etc.), your muscles need to get energy at a lot faster rate because you are working faster and harder. Unfortunately, since it takes so long to get energy from oxygen, the aerobic pathway just won’t work. This is where our bodies are so awesome: they can produce energy without oxygen, i.e. anaerobically!

All this being said, our bodies would rather produce energy using oxygen, especially since anaerobic exercise can be painful and exhausting (hello, lactic acid!). So, as you can see in the figure above, the green line eventually levels out over time, indicating a “steady state”. This means that your muscles have finally found their happy place and have been given enough time to use oxygen for energy. The area in red to the left of the green line is the Oxygen Deficit. Because your muscles can’t use oxygen to their best ability during this deficit period, they are considered to be functioning anaerobically until the period is over.

Because aerobic exercise (such as jogging, walking, and swimming) is performed at lower intensities with less speed and power, your muscles are going to be able to reach “steady state” and use oxygen for energy production a lot more easily . This causes the Oxygen Deficit to be very small.

On the other hand, because anaerobic exercise (such as interval training, running sprints, and heavy lifting) is performed at higher intensities with a lot of speed and power, the demand for fast energy causes your muscles to have to make the energy anaerobically. So, your muscles will take a lot longer to reach “steady state” and use oxygen for energy. This causes the Oxygen Deficit to be very large.

Tying it All Together: Oxygen Deficit and EPOC

So now that we are all semi-experts on Oxygen Deficit, I consider us worthy of learning about the power of EPOC! Remember how I said two seconds ago that if you exercise at higher intensities (i.e. anaerobically) you will have a larger Oxygen Deficit — one that is a lot larger than if you were to exercise at low to moderate intensities? Yeah, well that little factoid is pretty huge when you consider EPOC.

You see, all EPOC is is Excess Post Oxygen Consumption. In other words, it’s your body’s way of making up for that Oxygen Deficit period. It gets pretty complicated here so I will just keep it simple: your body uses EPOC to pay itself back for all the debt it increased during Oxygen Deficit. It missed out on oxygen at the beginning of exercise, so now it’s going to use quite a bit extra after exercise is complete. And guess what this extra oxygen is used for? If you guessed fat breakdown, you are absolutely correct!

This figure depicting EPOC is taken from one of my EXSC 620 readings. More free education for you! (:

Moral of the Story: Exercise Harder, Not Longer!

Now, if fat loss is your goal, you know that the point of exercise is to burn calories and therefore burn fat. This causes many, many, MANY people to believe that you have to go on these ridiculously long runs or spend hours in the gym to get any results. Not true. Yes, your body is a fat burning machine during long and steady exercise, but, once you stop, so does that high fat metabolism. You go right back to normal.

This is where EPOC is your best friend! When you exercise anaerobically and push yourself at higher intensities, not only do you burn calories during exercise, you will be a fat-burning machine after exercise, usually for at least a few hours. In fact, it has been shown in some of my classes that your body can continue to burn fats at an elevated rate up to 24 hours post-high-intensity exercise! Why? All because of that higher Oxygen Deficit and thus higher EPOC.

So what does this mean? Well, we all know that when we exercise at higher intensities we can’t go as long. But that’s fine! Why? Because EPOC. That elevated fat metabolism after exercise can far exceed the fat-and-calorie-burn that would occur during a boring and endless run. If you are like 99.9% of society and are constantly crunched for time, this is wonderful news! You can spend a fraction of the time that you normally would working out and get better results than you did before, just by exercising at higher intensities! Yay EPOC !!!

Interested in learning some killer high-intensity workouts that will turn you into a fat-burning machine? The personal trainers at Elite Nutrition and Performance can help you with just that! Schedule a FREE NO OBLIGATION CONSULTATION with us today and prepare to be amazed.